Now known as the Penistone Line, the Huddersfield & Sheffield Junction Railway (H&SJR) is a 13½ mile-long line initially constructed by the company of the same name to link Huddersfield to the station at Penistone on the Sheffield, Ashton-under-Lyne & Manchester Railway (SA&MR).

The H&SJR was authorised by an Act of Parliament in June 1845. The initial capital was £400,000 issued in 8,000 shares and the company’s director was Joseph Armitage of Milnsbridge House (Huddersfield). Charles H. Jones (who later became the first Mayor of Huddersfield) was the vice-chairman.

Two routes had been considered, but in November 1844 the cheaper route passing through the Kirkburton Valley was rejected in favour of a route through the Holmfirth Valley, with a branch line at Brockholes to serve Holmfirth.

Shortly before construction on the line had even begun, the Leeds, Huddersfield, Sheffield, and South Staffordshire Direct Railway had announced a route that would have seemingly involved them seeking running powers over the Penistone to Huddersfield line. However, this speculative scheme which hoped to raise up to £2,000,000 later described in the press as a “bubble” was abandoned within weeks.

There are 9 viaducts on the Penistone Line, mentioned below in engineering features. A shortage of reasonably priced local stone led to the Denby Dale Viaduct being constructed from timber although this was eventually replaced by a stone viaduct in 1880.

On 27 July 1846, the line was amalgamated into the Manchester & Leeds Railway Company (M&LR), which later became the Lancashire & Yorkshire Railway (L&YR) in July 1847.

Together with the Holmfirth Branch Line, the H&SJR was formally opened on 1 July 1850. The first train to Penistone was so overloaded with carriages and passengers that the engine came to a standstill in Thurstonland Tunnel. After splitting the carriages into two separate sections, the engine was able to take the first section through to Penistone Station before returning to collect the stranded passengers in the second section.

The Meltham Branch Line, which joined the main line at Meltham Junction near Lockwood Viaduct, was built between 1864 and 1869, opening to passenger services on 5 July 1869.

The Clayton West Branch Line, which joined the main line at Clayton West Junction (east of Shepley), was opened on 29 July 1879. 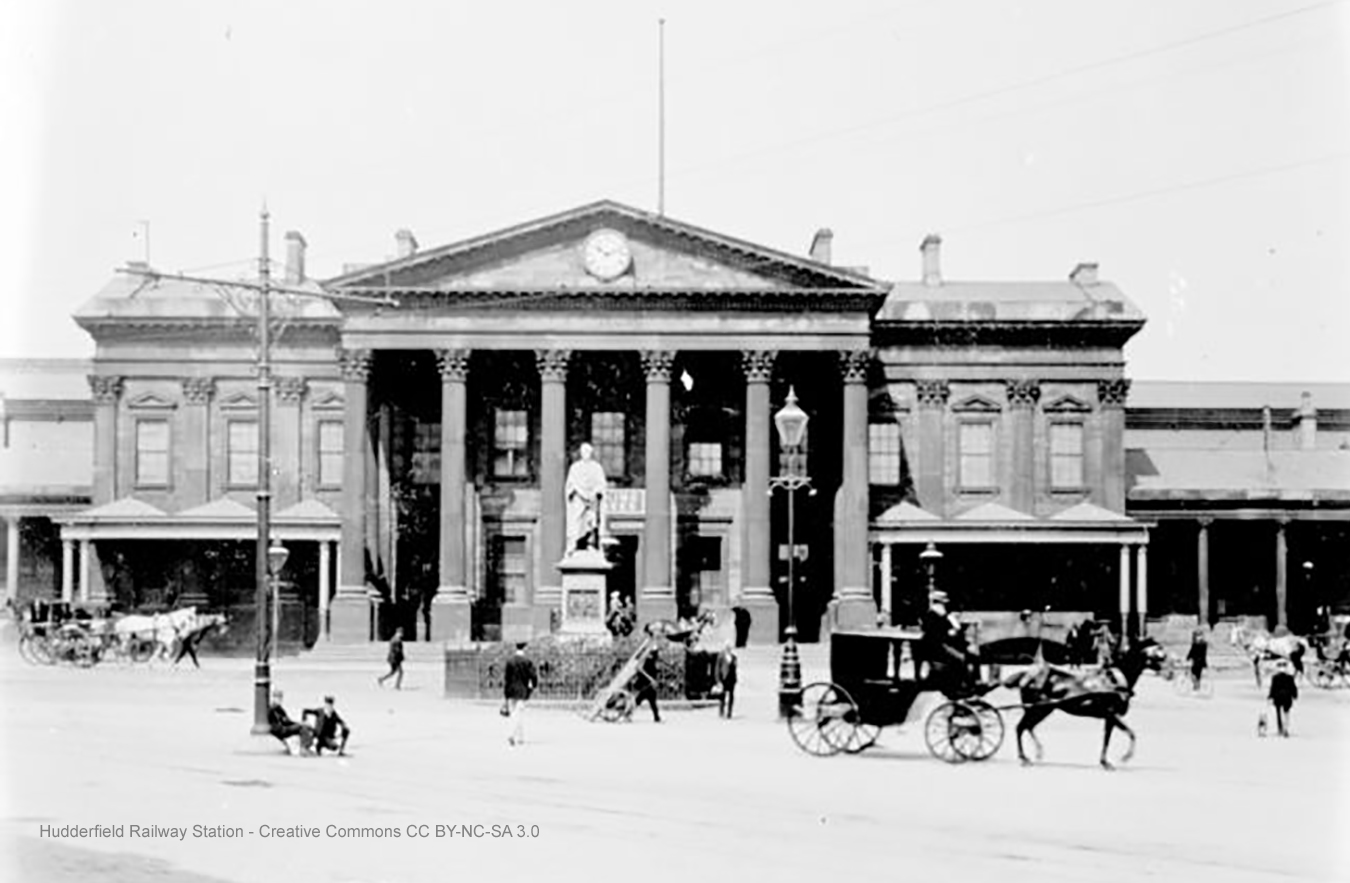 Huddersfield station’s façade is probably the only classical architectural railway building of note in the whole of West and South Yorkshire. Its outstanding frontage is 416ft long and includes 8 Corinthian Columns 68ft high in the central portico. It resembles the façade of a large country mansion and dominates Huddersfield’s St. George’s Square. The Central building, now the booking hall was originally a hotel, with the customers of the Lancashire & Yorkshire Railway, and London North Western Railways made their entrances to the station through the two smaller entrances at either end, now both Public Houses. 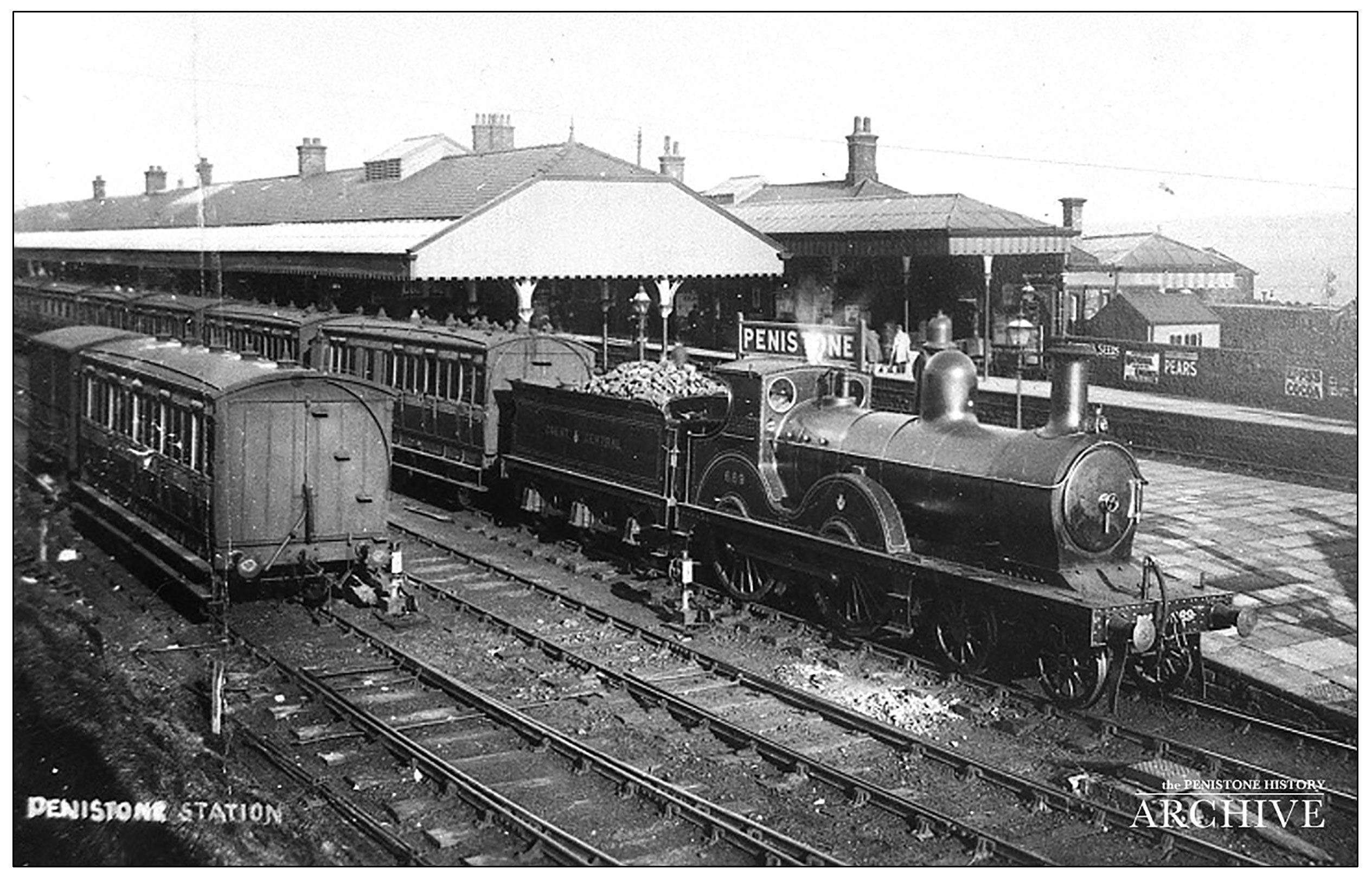 Closure of the Branch Lines

By the 1980s, the Huddersfield to Sheffield Line fell under the remits of the West Yorkshire Passenger Transport Executive (from Huddersfield to Denby Dale) and the South Yorkshire Passenger Transport Executive (Penistone to Sheffield). The closure of the Woodhead Line to passenger services in 1970 had reduced the traffic between Penistone to Sheffield and the closure of that section of the line — comprising the stations Wortley, Deepcar, Oughty Bridge, Wadsley Bridge, Neepsend, and Sheffield Victoria — was approved in September 1982.

By March 1983, the South Yorkshire P.T.E. had agreed to a British Rail proposal to re-route Penistone to Sheffield traffic via Barnsley (for one year only). Much of the double-track line between Huddersfield and Stocksmoor was then reduced to a single track by the end of the decade. By this time, West Yorkshire had withdrawn support as a protective move against being saddled with a dead-end at Denby Dale. After the trial year, South Yorkshire expressed satisfaction and agreed to permanent support together with plans for an extra train each way and a reopened station at Silkstone. West Yorkshire however refused to renew support at the price demanded by British Rail on the grounds that many passengers were travelling beyond their boundary, and then created new closure proceedings! It wasn’t until 1987, after much pressure from groups such as the Huddersfield Penistone Sheffield Rail Users’ Association that the threat of closure was removed. However, the branch from Shepley to Clayton West saw its last train on January 22, 1983 — one of the last major closures in the country.

Since the ‘final’ reprieve in 1987, the Penistone Line has, of course, gone from strength to strength. The active users’ association was complemented by the formation of Penistone Line Partnership, the first ‘community rail partnership’ in the country, formed in 1993. It became a model for other lightly used lines around Britain. Passenger numbers have more than doubled and the line now carries well over a million people a year. It could so easily have been lost.

Since 1993 Penistone Line Partnership has engaged with communities in many different and sometimes unique ways, along with promoting the rural landscape it travels through. Back in 1884 Thomas Normington, author of a Victorian railway guide wrote the following. In many places, this remains the same. Penistone Line Partnership continues to market this through its Guided Walks Programme.

“As you pass by Lockwood, Berry Brow, Honley, Brockholes and other strangely named places. You are taken through scenes of surpassing loveliness, some of them of almost alpine character; glen after glen and ravine after ravine are passed, with pretty manufacturing villages nestling here and there.”

The Huddersfield and Sheffield Junction Railway, The Penistone Line by Martin Bairstow

All aboard to celebrate one of Britain’s great unsung scenic rail routes from Huddersfield to Sheffield Stephen McClarence, Yorkshire Post.

Amazon.co.uk – Along the Penistone Line by Peter Thomas 2007